Hardly any other material can convey an architectural atmosphere as well as glass. Because of its transparency, glass is a to-go choice for the modernists and still holds a permanent place in the material palette of architects around the world. Such a unique item is the subject of Archiving Flux/Stasisa photo exhibition by Erieta Attali, hosted by the Greek Ministry of Culture at the Casa Romana on the Greek island of Kos, which opens its doors on July 21st. 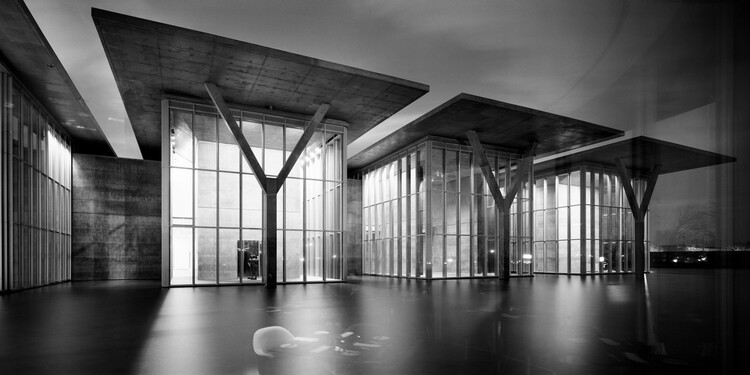 The exhibition takes place in an important 2nd-century archaeological site and monument built on the ruins of another Hellenistic-era house on the globe, whose uniqueness lies precisely in the ethereal aspects that glass gives them.

Erieta Attali (*1966 in Tel Aviv) has devoted himself to the interplay of architecture and landscape for three decades. Her exhibition at Casa Romana is open to the public until October 16, 2022. Read the official exhibition text below, written by the photographer herself.

From Erieta Attali: The uniqueness of this imagery lies in the fact that glass buildings are not presented as autonomous objects, but as a means of viewing their surroundings, which are influenced by climate or light conditions. In this photo series, I do not want to document architectural works objectively, but rather to convey the auratic qualities of the buildings, which are caused by elements that are not intended by the architectural design. The panoramic format photographs were taken either inside or outside the buildings, most of them at dusk when transparency and reflectivity coexist in a mysterious symbiosis.

Although transparency has been advocated since early modernism, contemporary developments in glass technology have not only renewed the material’s structural and insulating capabilities, but also the way it constructs visibility itself. Architectural glass acts as a “mirror glass” through which the surroundings can be viewed in a variety of unexpected ways. As is evident in the buildings selected here, through the extensive use of glass, the architecture becomes a visual device, an optical machine that shifts from a two-dimensional canvas to a luminous volume, from a transparency to an opacity to express objectivity, to confuse all familiar coordinates into an ambiguous mélange.

The surfaces of the glass structures are given a strange dimension of depth that reveals not only the inner microcosms of life that enclose them, but also the macrocosmic extension of local and universal elements that surround them. Concrete merges with sky, asphalt with sand, tiles with clouds, steel with trees. At other times, glass buildings have the special quality of disappearing, being absorbed by the darkness of the night and becoming part of their surrounding landscape; the mountains in Nagano, the sky in Hakodate or the street life in Phoenix-Arizona. Thus, despite the grandeur of the architecture involved, the landscape remains the most significant element, going far beyond the architectural gesture.