Despite making up nearly half of the photography workforce, women are dramatically underpaid and underrepresented compared to their male counterparts, according to a new report.

With the upcoming International Women’s Day, a creative content marketing agency conducted a study that looked at the disproportionate representation of female photographers in the industry – from the lack of brand ambassadors to fewer features on major camera brands’ social media profiles.

While there is no shortage of female photographers across genres, they are still underrepresented, underpaid and often invisible in various aspects of the industry. To highlight this more specifically, Wallflower Studios, a marketing agency based in Ljubljana, Slovenia, examined gender bias in photography in their report, Give Us Features, Not Flowers.

Female photographers make up nearly half of working photographers according to the US Bureau of Labor Statistics 2021, but this equal representation doesn’t translate into them getting equal paid opportunities, sponsorships, or visibility on the digital platforms. For example, the study found that the majority of young photography graduates were women, but they earned, on average, 40% less than their male counterparts. It has also been found that less than 25% of the commercial photographers represented by the industry’s leading agents are female.

Women have been equally active in photography since its inception. Although not always recognized, they were among the first pioneers to photograph alongside their male colleagues, developing and advancing the earliest photographic methods. 150 years later we are still very committed and it is safe to say that there is no shortage of women in photography these days. However, gender bias and inequalities are still very evident.
– Wallflower Studios

While women overall are less likely to be “recognized, featured, or celebrated as much as men,” the opportunities available to those who are not white decrease even more – 83% of photographers working in the United States are white, while Latino photographers work up 14%, followed by Black and Asian photographers at 7% and 5%, respectively.

First, the report examined the disparities in the ambassadorship of major camera brands, a title many professional photographers aspire to in their careers. While brands can promote their products through these ambassador programs, they invite both established and emerging photographers to try their products and give them exposure and a platform to showcase their talent.

Canon Philippines was criticized last year for its all-male Ambassador roster. Likewise, Canon USA nominated just 12 photographers out of 38 Ambassadors in 2021 and 14 out of 36 this year. Meanwhile, Canon Europe nominated just 14 women out of 109 ambassadors, despite an article asking why there aren’t more female photojournalists. 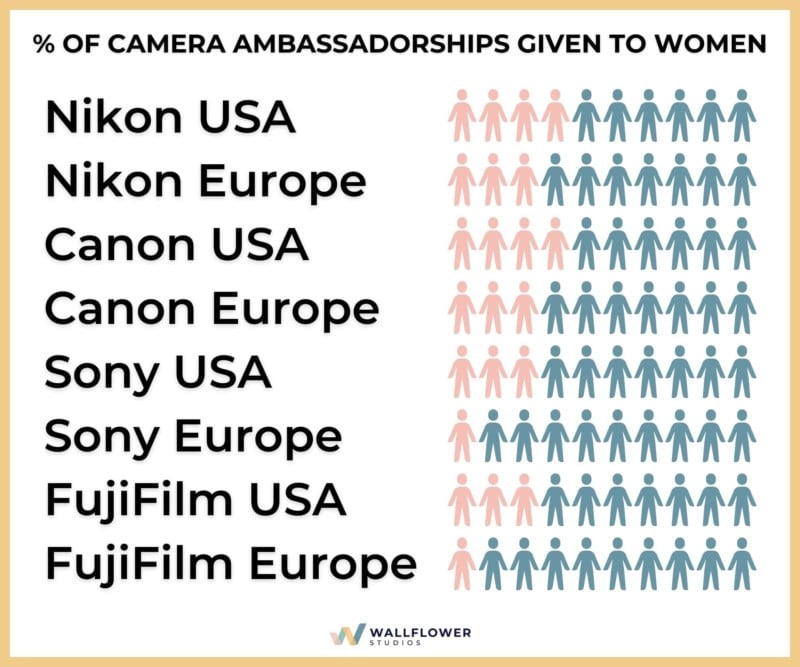 Canon isn’t the only camera brand showing a lack of representation among ambassadors, with other leading camera brands following a similar pattern. The report found that the representation of people of color was also lower than that of women. 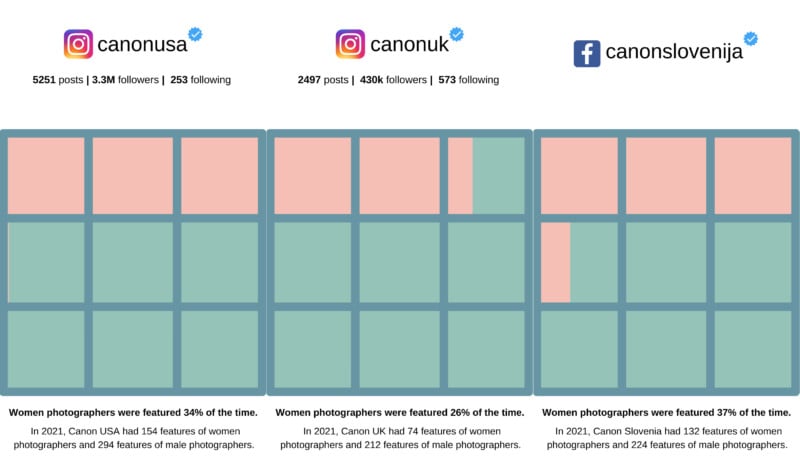 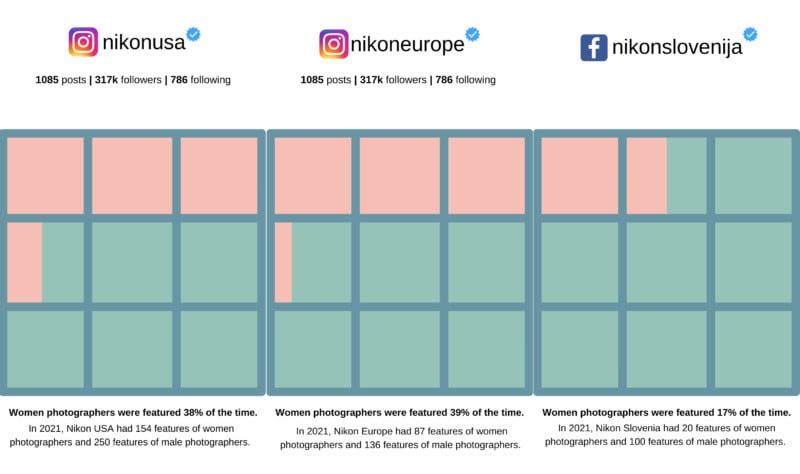 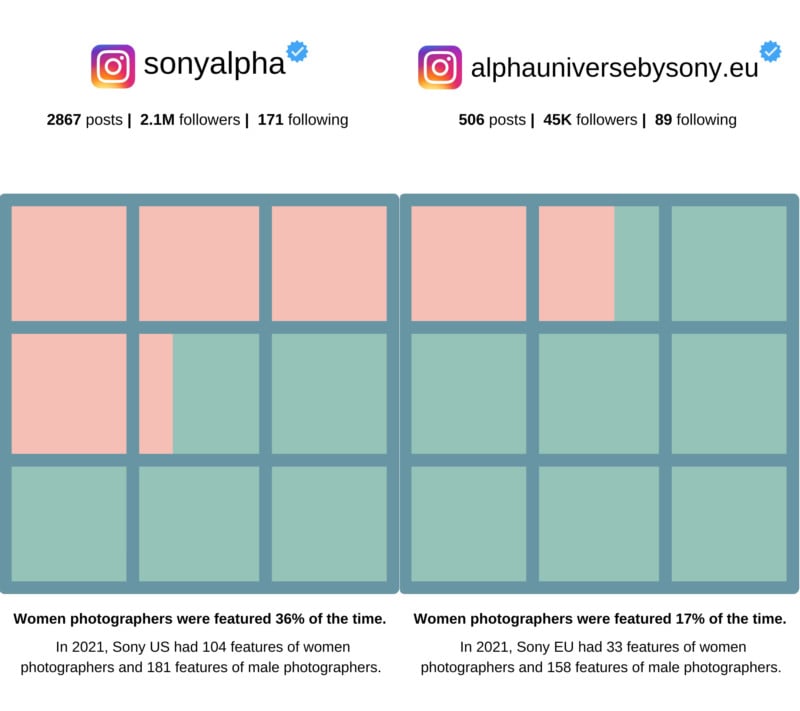 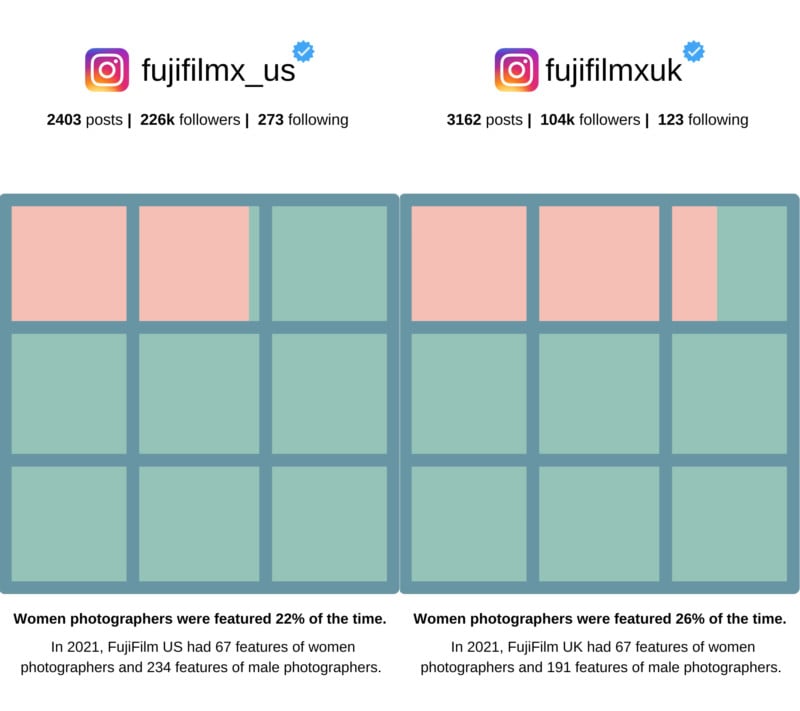 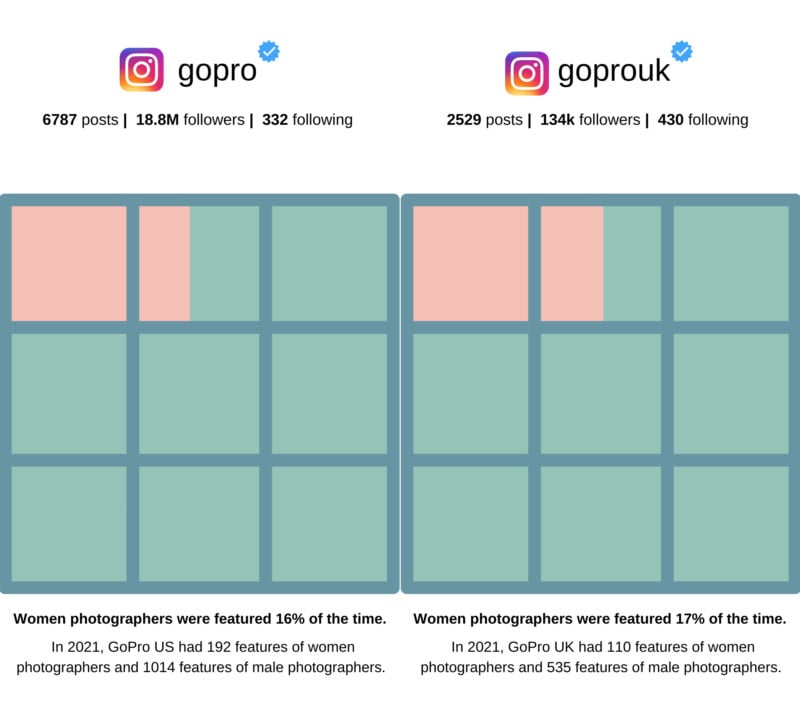 The report also addressed gender bias that might otherwise go unnoticed by the average Google user. The agency used different keywords, such as B. “Best Photography Instagram Accounts” and “Best Photographers” to see search results on both Google US and Google UK. 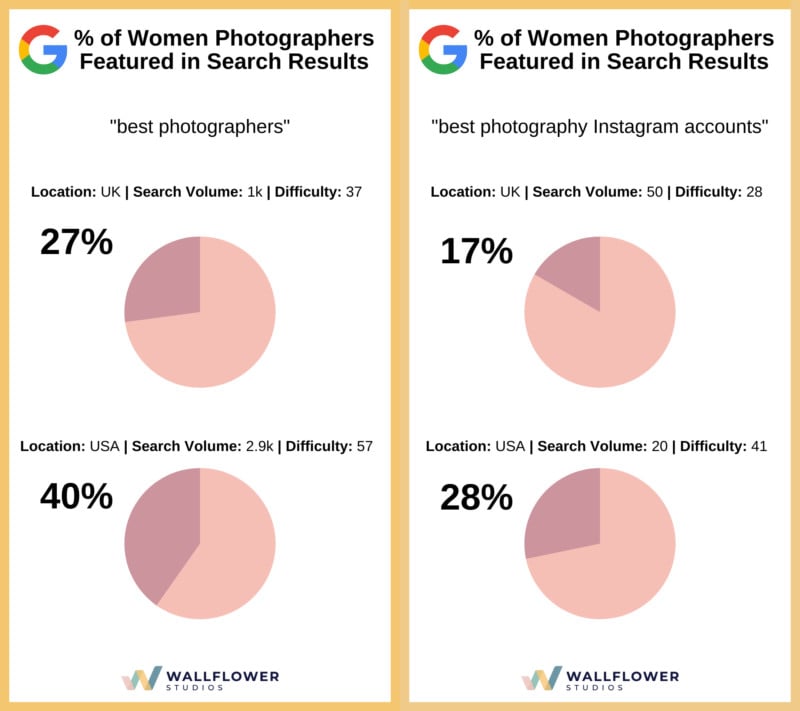 In both regions, the report found that women were less likely to be promoted to the first page. The “Best Photography Instagram Accounts” performed poorly on Google UK, with only 17% of women on the first page, despite Google US doing better on both searches.

The full report highlights numerous other industry insights as well as different ways to support female photographers through education, mentoring and more.